Bhupinder Singh Bhatia of Bhilai-The Mechanical Engineer Who Helps the Helpless With Ayurveda!

Some time ago I wrote a blog article here where I shared a personal experience of mine about a dreaded disease which is commonly referred as the suicide disease or trigeminal neuralgia. You can read that blog here!

I had the slightest thought then that this information would be of some help to several helpless people suffering from this extremely painful neuralgic pain syndrome who keep visiting modern medical doctors for getting all kinds of known pain management methods, though not quite successful always.

A few of them during this time had taken the pains to search out my contact information to know the whereabouts of my friend Mr. Bhupinder Singh Bhatia (B.S.Bhatia) of Bhilai so that they can contact him for getting the ayurvedic preparation that he had tried out successfully to treat my sister in law residing in Canada who was suffering from this dreadful disease.

Recently I had a visit to Bhilai wherein I met my old friend Mr Bhatia wherein I learnt about the successful administration of his ayurvedic preparation for every one who approached him taking my reference in this manner.

Since this ayurvedic preparation he had originally made by application of his technical mind coupled with the additional knowledge he had in ayurveda, has been now getting proved to be a successful cure for quite many people, I thought it would be prudent to publish some more information through this platform. This might help those who want such help to know about Mr Bhatia more and contact him directly. 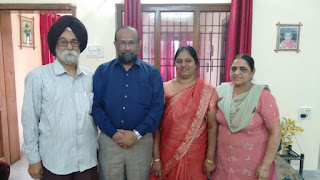 Above L-R: Mr Bhatia, the author and wife and Mrs Bhatia

Mr Bhatia had been my senior colleague in the erstwhile Bhilai Engineering and Design Bureau (BEDB), the engineering design and consultancy department of Bhilai Steel Plant that existed during 1972-2015 period. In fact it was a break away group from Central Engineering Design Bureau (CEDB) of Hindustan Steel Limited which managed the public sector integrated steel plants of India before it got further expanded and renamed as the Steel Authority of India Limited (SAIL). Some time in 1972, the central government took actions to form a separate engineering company  the Metallurgical and Engineering Consultants Limited, now well known as Mecon Limited by getting CEDB isolated from Hindustan Steel Limited. While doing so, as several engineers working in CEDB at Bhilai were not keen to join the new company, it was decided to retain them within Hindustan Steel Limited in Bhilai by creating a new department called BEDB for catering to the needs of Bhilai Steel Plant.

In 1986, the Bhilai Steel Plant management thought it prudent to expand BEDB with the induction of more young engineers and that caused me to get transferred to this department from the works area of Bhilai Steel Plant. It was here that I first met Mr Bhatia. He was a mechanical engineer having a couple of years more experience in the design and engineering side and I remember him as a pleasing and intelligent engineers always enthusiastic to solve various kinds of engineering problems that arouse in the steel plant. We worked in different areas of engineering specializations and soon we became good colleagues and friends. This much is written for the reader to get a broad idea regarding the initial professional background of Mr Bhatia.

Mr Bhatia was a learner and had a keen enthusiasm to learn new things. He was also a charming personality who was keen to surprise his colleagues and friends with his newly learnt things. I remember his hobbies during that period that involved homeopathy and the Japanese art of paper folding called origami. Perhaps his interest in learning new things got him attracted to the ancient Indian medical system, ayurveda, some time in the beginning of the Nineteen Nineties.

As there was a shortage of Ayurveda training centers and also a shortage of trained Ayurveda physicians in those days, many north Indian state governments allowed interested candidates to learn the fundamentals of this system by various correspondence courses and also from traditional practitioners who imparted their knowledge through unconventional methods. Some state governments tested the knowledge and skills of such students by conducting periodic examinations and awarding the successful candidates with degrees like 'Ayurveda Ratna' which enabled the successful candidates to register themselves as registered medical practitioners (RMP) in Ayurveda. Ayurveda being a traditional knowledge, its mastery needed a good command of Hindi and Sanskrit. Mr Bhatia, being from a Sikh family settled in central India, had a good knowledge in these languages.

It was another common friend of ours who imparted interest in Ayurveda in him. To be very frank, I too was interested, but my weak Hindi was an obstacle. This friend's family had been in the practice of Ayurveda. I remember him enticing we engineers to take up the study of this noble knowledge system of India so that we could unearth hidden treasures of ancient medicine for the benefit of people suffering from diseases with no cure in other medical systems.

My friend, Bhatia, took the challenge and within a couple of years he passed the Ayurveda Ratna examination which enabled him to get a licence to practice ayurveda as an RMP. I remember him taking the trouble to get the required permissions from the Bhilai Steel Plant management for venturing in to this profession during holidays and off times without affecting his normal duties as an engineering officer of the steel plant.

In the beginning things were not that easy. It was required to get experience. And I have been witnessing his progress in this field with sheer determination and hard work which he undertook as a dedicated hobby. Mr Bhatia has been a devout Sikh who attended Sikh satsangs (devotional group worship) every day evening where he religiously read and recited from the Sikh holy book, Guru Grandh Saheb. He had the blessing of his personal guru. All these helped him to master Ayurveda, especially in its branch which is known as the Raja Yog or the branch of Ayurveda that was privy to the rich and the royals.

He remained as my good friend all through out these years and he used to discuss the wonders of medicine system that Raja Yoga offered. The logical engineering mind with knowledge of modern science helped him to understand things better. When his system yielded success in treating diseases of many, he decided to be selective and doing his medical treatment hobby only for rare and incurable diseases where in he could experiment with his knowledge and experience.

And that was what he had been doing all these years. He employs his branch of Ayurveda system for bringing peace to many renowned people, bureaucrats, politicians, businessmen and the like who felt helpless with their unique health problems for which the modern medical field offered little.

Fortunately, there are many Ayurvedic pharma companies in India who produce basic Ayurveda medicines as per ancient books. However, many of these Raja Yog medicines employing what is called the Ras Chikitsa system are very expensive. Not only they are expensive, but their use without proper understanding of the physiological balance of the patients' body with respect to what is known as vat, pith and kaph would not normally yield any appreciable results. However, when a knowledgeable Ayurveda doctor like Mr Bhatia proportions these medicines according to the physiology of the patient concerned, wonders do take place.

Mr Bhatia got retired from Bhilai Steel Plant and he devotes more time now in serving those who desire to seek Ayurveda as an alternative for their physical or psychological ailments. As a matter of principle, he does not take any fee for his medical treatment. His services are free. However, the patients have to bear the costs of the medicines, which could be expensive in certain cases.

Mr Bhatia lives in his residence which is located at Priyadarshini Parisar East, Bhilai, Chhattisgarh State. He can be contacted @ 91-9826176514 (Mobile and WhatsApp call)