Finally Aadhaar ID is Downloadable-Here is How You Get It ! 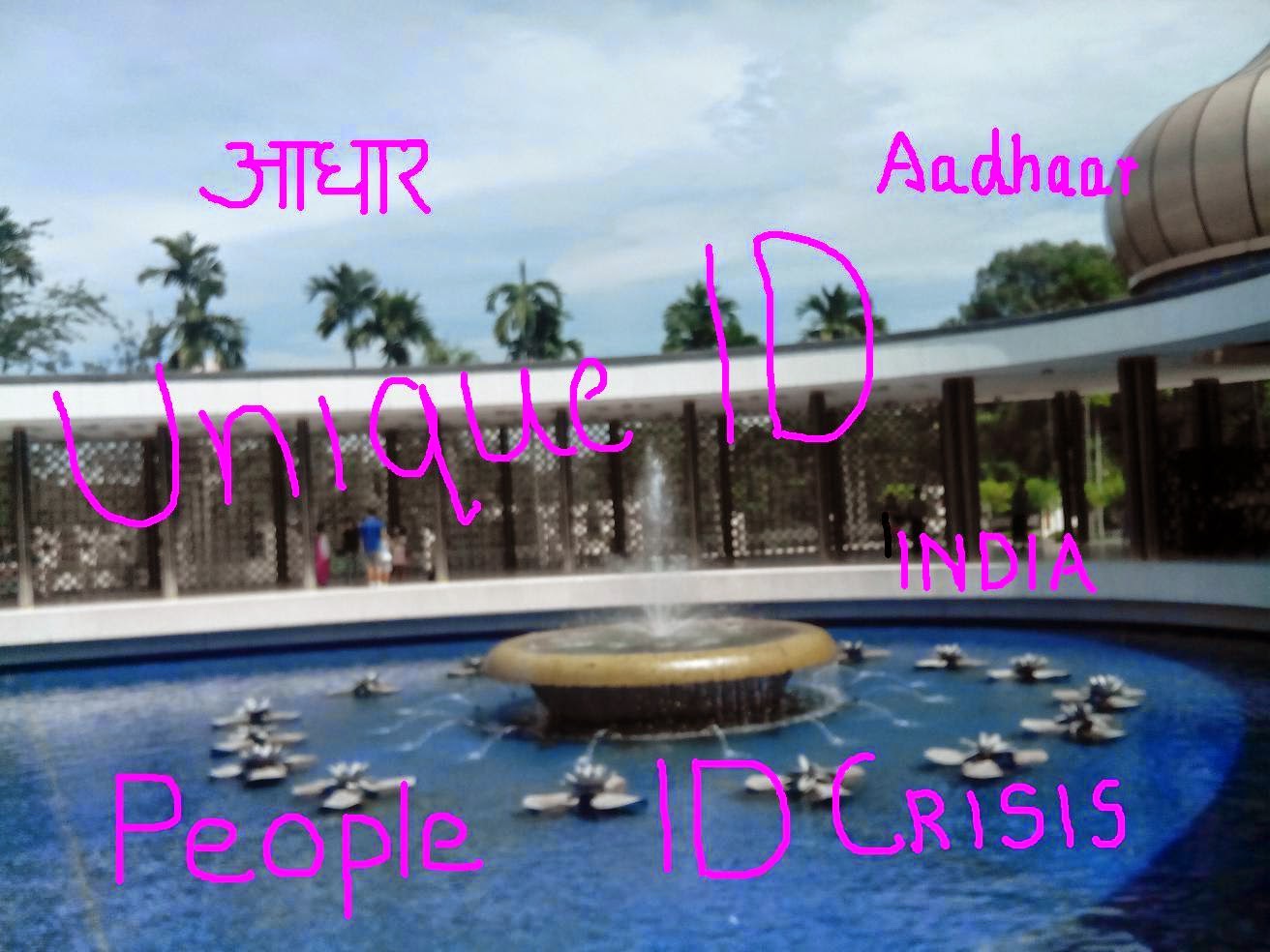 Today morning the inside page of my English Newspaper carried a halfpage advertizement from the Unique Identification Authority of India (UIDAI).

It had a bold title which said : Your AADHAAR now on your fingertips !  Buy the Latest Redmi 1S Mobile From FlipCart!

The ad gave the brief to the public how to get this now famous Aadhaar number using your mobile or through the internet.

It is imperative that you should have undergone the process of photographing and scanning your bio data some time previously and had obtained the Acknowledgement / Resident Copy from the enrolment agency man who took your photograph and scanned your eyes and fingers.

Now if you had kept that piece of paper properly there is hope that you can now get your aadhaar number or the electronic digital document giving your aadhaar details.

We should not laugh at the incapability of the government of India to deliver a very important document such as this for which they had spent crores of rupees securely to the person whose unique identity and address they have meticulously recorded using its own postal department !

Me and my wife had scanned ourselves an year ago and were waiting for the document to reach us by mail. But we did not get it though many who scanned themselves together with us in the same scanning booth claimed as getting those documents. Eventhough we live in a prominent address, we some how stood untraceable for the postal service. At least that was my thought so far.

Now since the UIDAI finally succeeded in making this advertizement, two things got clear to me. First, the UIDAI is part of the Planning Commission of India. And second, they had not completed preparation of the Aadhaar even for those who got scanned.

So taking cue from the advertizement I decided to use the internet route to get my Aadhaar.

I was successful and I got it. But to tell you the truth, I am a bit coversant with the computer transactions and that helped me a lot. The procedure, though apparently simple, could go wrong if you are not careful.

Here is how you do it.

First keep your Aadhaar Acknowledgement - Resident Copy ready with you.

Five things from this slip are important for you to get your Aadhaar.

1. The enrolment number / नामांकन संख्या . This is on the top left side of your slip below the Ashoka emblem of the governement of India. It looks something like this : 1053/61244/05470 . Note this number. Note that this number is in three parts, each separated by a slash (/) This slash is not to be typed when you enter this number online at the UADAI website.

2. The Date / तिथि -  This is given at the top right side below th Aadhaar emblem. Note that it is a date followed by the time in HH:MM:SS (Hour:Minute:Second) . All these six sets of digits in this are needed to be entered. Remember not to type the slash (/) or the colon (:)

3. Your Name - The name in English as given in your acknowledgement. You need to type it online in the website.

4. The PIN Code - The pincode as per your address in the acknowledgement slip. This also need to be entered online in the website.

If all the above are duly noted and ready, you can now try to get your Aadhaar e-document.

Ensure that  the Adobe pdf reader installed and working in your PC / Laptop.

Since you are reading this blog online you are internet ready.

Now click this link [ Get Your e-Aadhaar Here ! ] to go to the website of UIDAI to fill up your details to download  the e-Aadhaar document in pdf format.

While you submit the details, a web page will open up asking confirmation of your mobile number with the last four digits displayed. Confirm it by clicking the button for it. If it is not your number reject or cancel the process. In such a case you perhaps cannot proceed further in this manner.

When the mobile number confirmation is done, an SMS will be received in your mobile from Aadhaar site. This SMS will give you this One Time Password (OTP) which you have to enter in the box provided for that in the webpage. The OTP contains digits and capital alphabets. Be careful in entering the same correctly.

Once the OTP is correctly entered, the e-aadhaar download link will appear. Click it and save your e-aadhaar in your computer.

One more thing to note. The pdf e-aaddhar file you downloaded is password protected. While you click it to open it will ask for a password. The password is your Pin Code of your address as per your enrolment slip.

So that's it. You got your e-aadhaar and be happy ! A himalayan task accomplished by your government with years of intelligent work ! You should feel proud !

But then don't ask me how you change your address in the e-aadhaar, if you had shifted your residence in between. Perhaps that is not known even to the UIDAI too for the time being. They might think of it later after all the people get their aadhaar fixed up.

Also don't ask me how to make some corrections in the data (such as the mobile number ) if it got changed or recorded wrongfully. I have no idea. Perhaps not even the UIDAI too has not thought of it right now.

Then the big question, what if you do not have a mobile or internet ? That too when the e-aadhaar is essentially meant for helping people of that sort. I do not have any answer to that too !

If interested have a look at those by clicking these links:


Unique Identity to All: the Simple Thing to Do

The Unique Identity Crisis of India !

It is possible that you may have various kinds of complaint with regard to e-aadhaar. The UIDAI has a site which can be used to file your complaints. There are many other important things you can do and know here with regard to your Aadhaar.

To visit this site click this : e-Aadhaar Complaint Filing Online !

Here there is an important link which could be very useful for some. The UIDAI has thoughtfully included a system where we can do some corrections with regard to our data that is already recorded by UIDAI.

The corrections that are possible are Name, Address, Gender, Date of Birth and Mobile Number. But this correction can be done online only if you had a previously registered mobile number while you enrolled for aadhaar for the first time. Other wise you have to do this by contracting specified offices by post.

What all you have to do can be read by clicking this link: e-aadhaar self service update guidance

So aadhaar is slowly getting improved and is made the basis for many things by the government.

Already the authorities have mandated that in future all domestic LPG gas cylinder subsidies would only be refunded to the customers after they purchase the cylinders giving the un-subsidized price initially. To do this your aadhaar number has to be linked with your gas connection number.

For example Indane domestic gas consumers can do this in many ways. Visit the Indane site for doing this.

Further your bank account also needs to be linked to your aadhaar number. Your bank will provide the form for doing this.

The methodology is slowly evolving. The forms and formats are getting popularized. Those who know about it more may share that information and their experiences using the comments facility below.


Though it was the former UPA government which took the initiative on Aadhaar, there were much internal conflicts within the UPA government ministries and as a result, the scheme was almost allowed to vanish after spending thousands of crores of public money.

Thanks to the vision and determination of the present Modi Sarkar, Aadhaar biometric based national identity initiative is getting more and more acceptance now.  It would perhaps get the statutory finishing touches and utility in the coming days. We could expect the government to take steps to overcome the problems people face and come out with a system which is amenable to error corrections in a much simpler way without causing trouble to the citizens.

Recently, the government took a decision to allow government pensioners including the ex-servicemen with Aadhaar to get their yearly ritual of 'life certification' for availing pension, much easier. They need not go to the banks or to any gazetted officer for getting the life certificate any more. They can also enroll for getting the Aadhaar in the nearest enrollment center.

More details of this can be obtained by visiting this new government website: Jeevan Pramaan.
Posted by Er. Rajan C Mathew FIE