Why Do We Face Difficulty in Distinguishing Facts from Falsehoods!

Man is slow to perceive that contrastive perfection and imperfection produce potential evil; that conflicting truth and falsehood create confusing error; that the divine endowment of freewill choice eventuates in the divergent realms of sin and righteousness.
Potential evil is time-existent in a universe embracing differential levels of perfection meanings and values. Sin is potential in all realms where imperfect beings are endowed with the ability to choose between good and evil. The very conflicting presence of truth and untruth, fact and falsehood, constitutes the potentiality of error.
[The Urantia Book Paper-54] 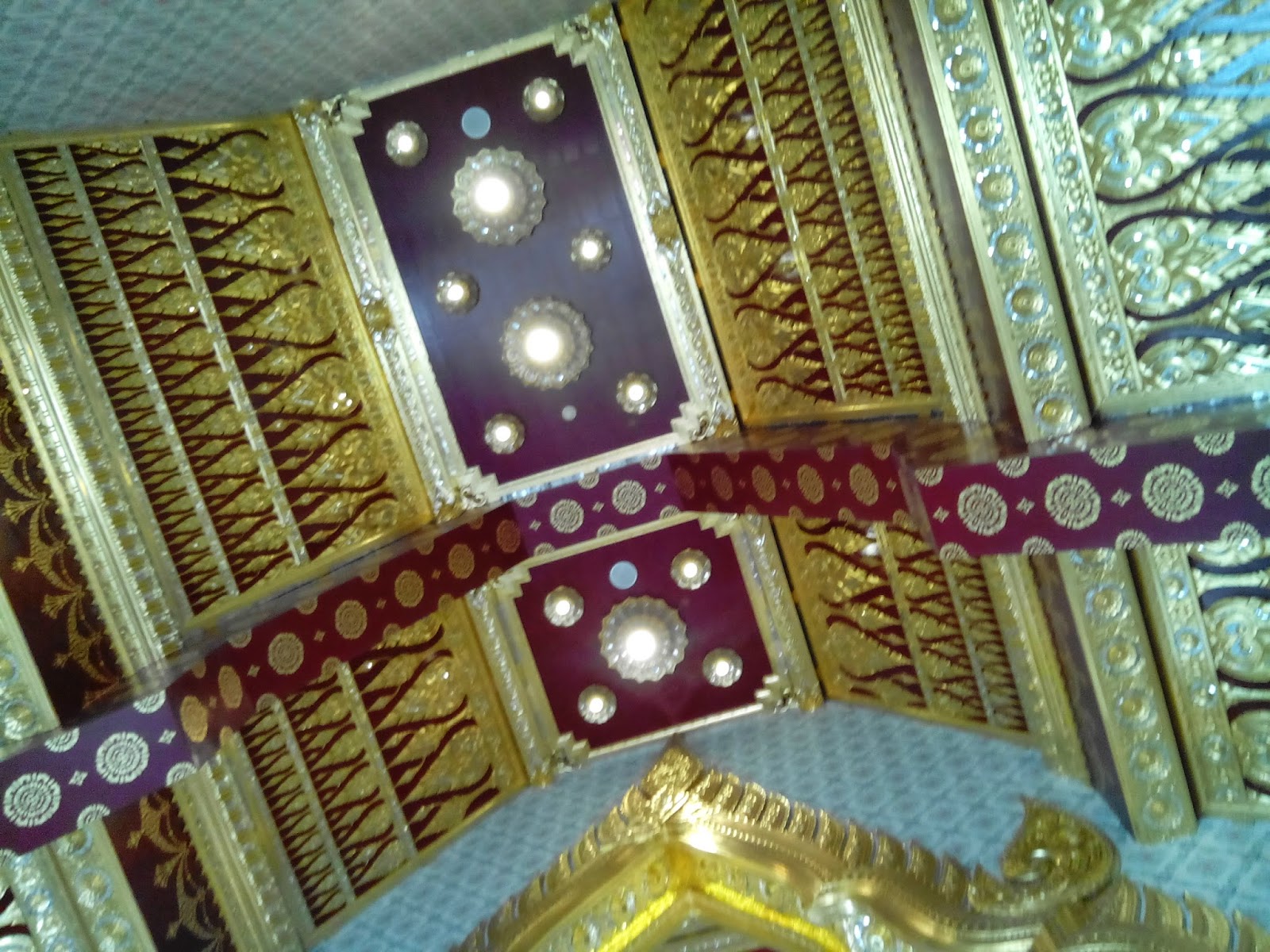 Golden Ceiling in the Temple of  Wat Traimit in Bangkok
An attempt to achieve perfection in a world of imperfection!
Suppose that you wanted to teach your young child a well known thing. For example, you wanted your child to realize that the electrical plug point in your home has electricity and this electricity which is invisible is really dangerous if one touches. You wanted your child to realize this so that he or she would not dare to experiment with the socket in your absence and risk life.

Many good and obedient children might accept the valuable guidance given by the experienced elder. But there still exist a few other curious children who might not be satisfied with the eleder's advice. A few of them would be too curious to try touching the bare wire to know what happens. While doing it if they get a good shock and still survived it, they would perhaps never ever dare to do it again. Here they have learnt some hard facts of life by first hand experience!

In this case, the child with the halfhearted faith in its father now would become a confused one. The child is confused and is not able to make up its mind to distinguish between right and wrong. It is becoming difficult for the child to judge whether its father was right or the cunning uncle next door who was obviously not a well wisher.

All at the same time, this child is also not a daredevil to try to experiment to know the facts for sure. Such a child would have doubts all through his life. He or she does not know for sure about the dangers of electricity or about the right safety steps to be adopted to handle it.

The problem with such a child or person is the inability to distinguish between right and wrong. To add to the problem, this person does not know whom to trust or believe. Besides, this person lacks the curiosity and adventure to undertake an act of experimentation and experience to judge facts from falsehood.

A good majority of humans do exist in this world in this manner. Even after attaining the age of adulthood, they remain with the mind of an immature, unintelligent and childish mind. The problem with them is their difficulty to judge between right or wrong, difficulty to understand facts from falsehoods and difficulty in judging a good advice from a bad advice.

The existence of clever and cunning uncles around them enhances their confusion. It becomes now difficult for them to trust their own parents. They do not know whom to trust now. They become a confused lot or a misguided lot when they keep living their lives on this earth. In turn some of them would become cunning uncles and aunts to younger ones around them, perpetuating falsehoods and enhancing confusions all around!

A confused person who is incapable of chosing the right path is bound to face danger at some point of time in life. It is not that such persons do not have the ability to judge between right or wrong. They do have the ability. But they suppress that ability by deliberately succumbing to their own confusions to grow within their minds.They let their lives to be played upon by cunning uncles and aunts around them and also let them to be like a confusing uncle or aunt to others, later.

Just as there are human confusion masters every where, there also exist super human deceptors who try to fool gullible humans. They want the humans to turn away from the right path and chose the wrong path that leads to destruction. That is the simple logic of the sadists: If I am going to be doomed, I want you too doomed like me! But for simple gullible humans, who cannot escape the tricks of other cunning humans, it is beyond their natural abilty under normal circumstances to escape from the pranks played by the tricksters.

The problem with the gullible people lies with their perception and intrepretation of things. They understand facts as falsehoods or falsehoods as facts quite too often. If they get someone to support their perceptions, it would be very difficult for them to make the corrections of their errors. And when they are dominated by ego, matter becomes too rigid and their errors become non-negotiable. They tend to side with evil by deviating from what is good.

Today I was listening to an interesting conversation among three of my colleagues. They have been analysing the hit and run case of the Hindi film star, Salman Khan and the judgement of the lower court that awarded the celebrity with a five year jail term.

There were too many issues to be debated: Why did it take the court 13 years to conclude? Was it right for the poor victim to sleep on the foot path during the night of the accident? Was it right for the court to grant bail to the artist on the same day after declaring the punishment? The debate continued for some time and my learned friends concluded that it was quite right for the deceased poor man to sleep on the foot path and the actor was rightly punished for his arrogant alcoholic behavior. I know there are many others who feel just the opposite who keep arguing in support of the actor.

I am not here to judge what is wrong or what is right. All I wanted say is about the difficulty with which our right and wrong perceptions keep moving from time to time.

Had we been perfectly matured with knowledge, intelligence and wisdom, we all would have arrived at the same conclusion. If it is not so, then logically it proves that we have not attained perfection. Perhaps we have miles (generations) to go in this context (to achieve perfect maturity levels). Perhaps then only we would be in a position to judge what is right or what is wrong. Perhaps then only we could distinguish facts from falsehoods.

Till then, there are enough chances that our decisions and judgements are all erroneous in nature!

Email ThisBlogThis!Share to TwitterShare to FacebookShare to Pinterest
Labels: facts and falsehoods, human perceptions, perfection and imperfection, rights and wrongs