Jesus' Teachings About Earthly Accidents of Time: A True Superhuman Narration From the Urantia Book!

The following passage is directly quoted from Paper-166  of the Urantia Book under Part-IV, which deals with life and teachings of Jesus Christ on earth. The authors of this part of the book are stated as the Midwayer Commission, comprising of a divinely authorized group of invisible immortal beings whom the various other invisible authors of the book introduce to us as the midwayers of earth. Midwayers are a group of beings who exist in a realm of existence above human beings but below various other orders of higher order immortal beings.Midwayers are capable of doing things that humans do in the material realm and much more. As they have been in existence on earth for thousands of years, they are said to have direct knowledge about most of the history of earth and its civilizational progress. They understand the languages and the knowledge that humans gained so far and are direct watchers of human progress on earth. They assist superior divine beings in accordance with the universal administrative plans of God. For more details about them read this blog. They got the divine approval to re-state the life and teachings of Jesus which got included as part-4 of the Urantia Book as the divine administration of the universe felt the gross errors that crept in the various writings that the human authors of the past had created, including the four gospels included in the New Testament Bible of the Christians. Incidentally, Part-4 of the Urantia Book is the most appealing and exhaustive literary work that is so meticulous and matter of fact in its details in describing the life and teachings of Jesus on earth. For any unbiased reader, Part-4 provides logical answers to many unanswered questions that they likely had in their minds.

Human beings are perplexed by natural calamities, accidents, war, acts of terrorism, political mismanagement, diseases, etc which often affect thousands of innorcents severely and fatally while several others find miraculous escapes. Some of the intellectuals keep thinking to find the logic behind it. The debate then proceeds further to the irrationality of believing in God or even the rationality of it. A friend of mine sends me this link where this question is inconclusively dealt by Daniel Burke, CNN Religion editor, after he escaped quite miraculously from the Amtrak train 188 crash in the USA.

Unfortunately, this is difficult for us to understand when we visualize the universe organization purely from our materialistic view point. But divine plans transcend materialistic realms, not just as a concept, but as a reality. That is what the Urantia Book reveals with its seamless effort of unifying all those religious beliefs sans their erroneous teachings deviating from facts that are not easy for humans to prove with their limited comprehension.

The following Urantia Book narration reproduces the efforts made by Jesus Christ to remove certain misunderstandings that the common folks of his time, like his immediate followers, nurtured in their minds. Notice carefully the answer that Jesus provided  with regard to the common accidents and natural disasters that keep happening on earth ( this is partly given in the Bible too):

While most Palestinians ate only two meals a day, it was the custom of Jesus and the apostles, when on a journey, to pause at midday for rest and refreshment. 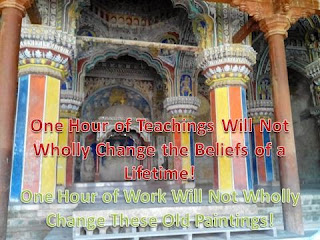 And it was at such a noontide stop on the way to Philadelphia that Thomas (one disciple of Jesus) asked Jesus:

“Master, from hearing your remarks as we journeyed this morning, I would like to inquire whether spiritual beings are concerned in the production of strange and extraordinary events in the material world and, further, to ask whether the angels and other spirit beings are able to prevent accidents.”

“Have I been so long with you, and yet you continue to ask me such questions? Have you failed to observe how the Son of Man (the phrase Jesus often used to address himself) lives as one with you and consistently refuses to employ the forces of heaven for his personal sustenance? Do we not all live by the same means whereby all men exist? Do you see the power of the spiritual world manifested in the material life of this world, save for the revelation of the Father and the sometime healing of his afflicted children?

“All too long have your fathers believed that prosperity was the token of divine approval; that adversity was the proof of God’s displeasure. I declare that such beliefs are superstitions. Do you not observe that far greater numbers of the poor joyfully receive the gospel and immediately enter the kingdom? If riches evidence divine favor, why do the rich so many times refuse to believe this good news from heaven?

“The Father (God) causes his rain to fall on the just and the unjust; the sun likewise shines on the righteous and the unrighteous. You know about those Galileans whose blood Pilate mingled with the sacrifices, but I tell you these Galileans were not in any manner sinners above all their fellows just because this happened to them. You also know about the eighteen men upon whom the tower of Siloam fell, killing them. Think not that these men who were thus destroyed were offenders above all their brethren in Jerusalem. These folks were simply innocent victims of one of the accidents of time.

“There are three groups of events which may occur in your lives:

“1. You may share in those normal happenings which are a part of the life you and your fellows live on the face of the earth.
“2. You may chance to fall victim to one of the accidents of nature, one of the mischances of men, knowing full well that such occurrences are in no way prearranged or otherwise produced by the spiritual forces of the realm.
“3. You may reap the harvest of your direct efforts to comply with the natural laws governing the world.

“There was a certain man who planted a fig tree in his yard, and when he had many times sought fruit thereon and found none, he called the vinedressers before him and said: `Here have I come these three seasons looking for fruit on this fig tree and have found none. Cut down this barren tree; why should it encumber the ground?’ But the head gardener answered his master: `Let it alone for one more year so that I may dig around it and put on fertilizer, and then, next year, if it bears no fruit, it shall be cut down.’ And when they had thus complied with the laws of fruitfulness, since the tree was living and good, they were rewarded with an abundant yield.

“In the matter of sickness and health, you should know that these bodily states are the result of material causes; health is not the smile of heaven, neither is affliction the frown of God.

“The Father’s human children have equal capacity for the reception of material blessings; therefore does he bestow things physical upon the children of men without discrimination. When it comes to the bestowal of spiritual gifts, the Father is limited by man’s capacity for receiving these divine endowments. Although the Father is no respecter of persons, in the bestowal of spiritual gifts he is limited by man’s faith and by his willingness always to abide by the Father’s will.”

As they journeyed on toward Philadelphia, Jesus continued to teach them and to answer their questions having to do with accidents, sickness, and miracles, but they were not able fully to comprehend this instruction.

One hour of teaching will not wholly change the beliefs of a lifetime, and so Jesus found it necessary to reiterate his message, to tell again and again that which he wished them to understand; and even then they failed to grasp the meaning of his earth mission until after his death and resurrection.

The above passage may not satisfy most human beings. Even the disciples of Jesus could not understand what Jesus explained. The situation has not changed much with regard to humans. It is important to understand the universal plan of progress of intelligent life comprising of both material and spiritual realms.
Posted by Er. Rajan C Mathew FIE