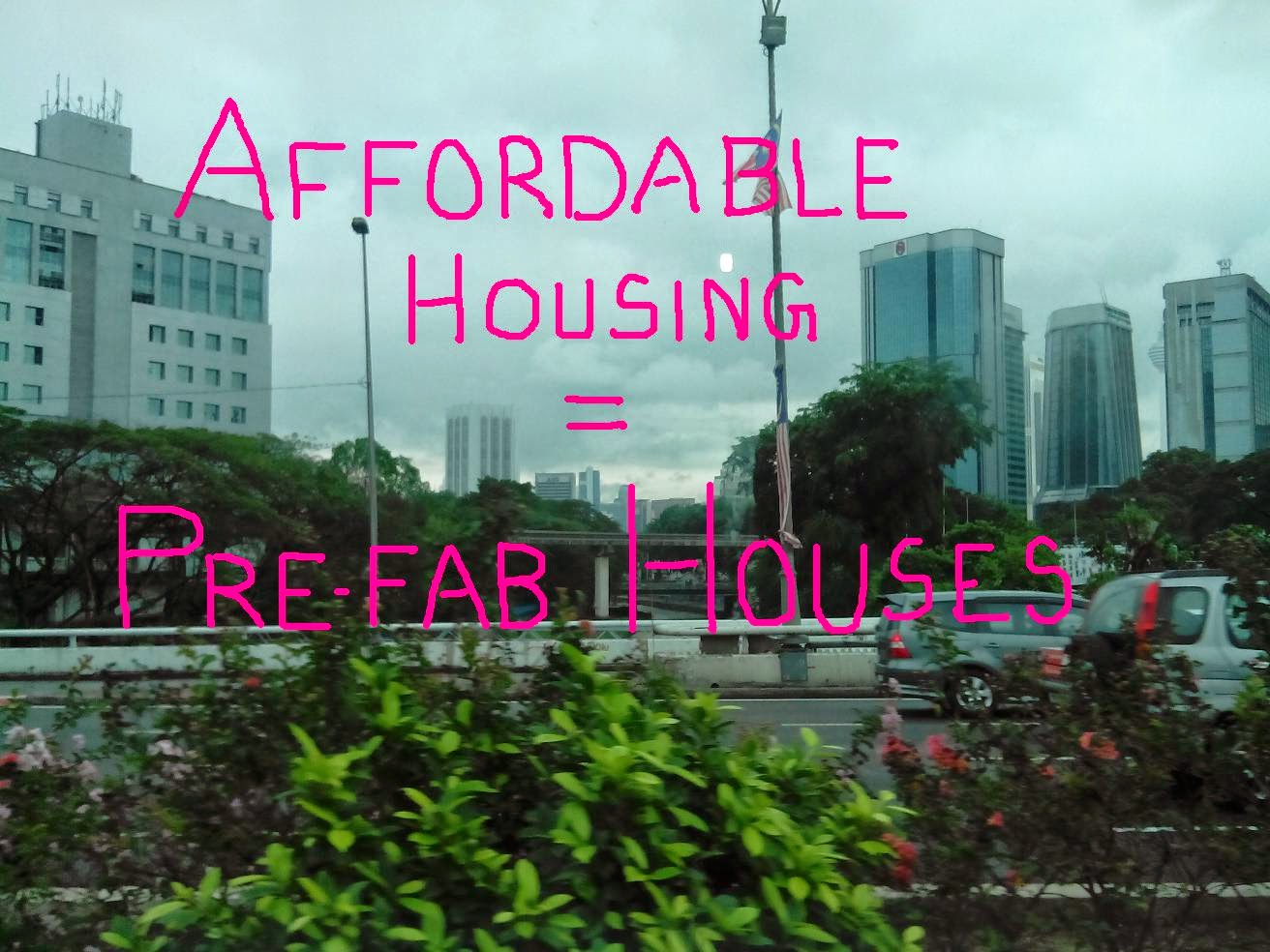 A couple of days ago, I happen to see a website of a South African company specializing in the design and construction of low cost houses that could be made in just three days ! Later I have found information in the internet about the existence of many such firms who are specialists in this field. The idea they are promoting and implementing is nothing complex as compared to the high tech industries. But they are simple and most useful for human beings.

There are many unconventional options and designs. Pre fabricated and cast in site versions. The beauty is that these designs are very easy to make and are decent and more importantly, inexpensive.

If you search the internet you find that the world is much progressive in this except perhaps this large nation, India.

Indians are now consuming Chinese manufactured things in large quantities. The Chinese have gone ahead in this area too. There are many small and big manufacturers who make various kinds of panels for house construction.

Another important aspect is the large scale use of unburnt soil bricks of various kinds in house construction. Some efforts in this line could be seen in India here and there, but not in an organized manner.

On the overall, house construction in India so far in the organized sector has been in the conventional manner. Burnt bricks, cement mortar, steel reinforced cement concrete, some glass, some aluminium, tiles, etc all labour intensive, time consuming and expensive.

None of the present designs of houses in India are eco friendly. A independent house of say, 900 sq.ft carpet area takes at least an year to complete and costs as high as Rupees two million. On the other hand, a dwelling unit of similar size in a multi storied apartment building in urban India takes more than three years to complete and costs anything in the range of rupess three million to ten million.

Even though India is the second most populous country in the world, more than half of its population of 120 billion people live without a proper shelter. These populace is classified as the below poverty line (BPL) people whose average family income is less than Rs 5000 per month. It is just unthinkable that such people can even afford a housing unit even if it costs only one tenth of the cost of a small house that I mentioned above.

Besides, India has a serious shortfall of skilled labour in the house construction field. There is serious shortage of masons, carpenters, electricians, plumbers, construction supervisors, planners, experienced engineers and architects.

It is foolish to think that the Indian government can do some thing to sort out such issues. The governments in India now are too short of visionary leaders who could foresee such problems and use their leadership to do some thing !

It is not true to say that India does not have any governmental organizations to do research work in this field and popularize such useful technologies. Organizations such as the Central Building Research Institute (CBRI) and many state government sponsored housing boards and other such governmental organizations have been in the field of house research and business for many decades. However, none of them have deviated much from the conventional methods of construction and could not popularize any practical and aesthetic housing designs which are affordable and also good to live comfortably.

Rapid growth of concrete constructions have caused serious depletion of river sand in many regions in India. Kerala is a good example in this regard. Here, river sand has become a scarce commodity that it is being imported from far away countries like Combodia. Even factory made sand, which is nothing but crushed rock, is also getting used as an alternative. The cost of river sand which used to be a few hundred rupees a couple of decades ago is now costing over Rs. 10,000/- a cubic metre. Cost of standard burnt brick has also increased many fold.

Concrete buildings are not at all comfortable to live due to its thermal characteristics. Homes built with RCC roofs absorb all the heat of the sun during the day and radiate it inwards in the night to the discomfort of the dwellers. People who can afford, then spend much on air conditioners and consume so much electricity making India a power hungry nation already, even with half of its population sleeping in the open skies !

All these call for urgent actions to popularize alternative design and construction technologies with regard to the future houses in India both for the urban and the rural people.

All over the world, changes have been brought about by dynamic and visionary entrepreneurs. This is an area where such people can think differently and evolve a business model that is useful to them, the users and the society.

Why not we think about designing, manufacturing and marketing completely knocked down (CKD) houses which could be assembled at site in a few days with the help of trained personnel ? Such houses should also look better aesthetically, comfortable, affordable and maintainable with a long life.

It is not difficult technically. Technologies and know how already exist in the world elsewhere.

What is needed is willing entrepreneurs who can take up the challenge to make a change !

The possibilities and opportunities are immense !

For those who are interested in knowing more, I am including some prefab home and building manufacturers in India with their web address links:

Yet, it seems that no builder has apparently thought of bringing this technology to the convenience of the rural and sub-urban folks in India by making it popular and affordable. Those entrepreneurs having an urge for doing business laced with service should think about it.

The question is how a genuine person in India, thinking of building an affordable and durable home can have it constructed and delivered to him in about a month's time? Who will market the concept to such people ? And would such a home of say, 500 sq.ft be available at a cost less than that made using the prevalent technology using burnt bricks and cement and yet stylish and comfortable ?

The technology is available. What is lacking is the will to market it to those who need it.

[Please also take some time to come back and read my previous  blogs and blogs on other topics as well. You can reach to those by clicking the links in this page. I would be happy if you take some time to express your views using the comments facility down below. Please  use the same comment facility to interact with me for any doubts or clarifications that you might have. Here is the page link which gives the   list of all my blogs  where you can open all my blog titles.]
Posted by Er. Rajan C Mathew FIE