Origin and Development of Human Beings on Earth-Have You Ever Heard This ? 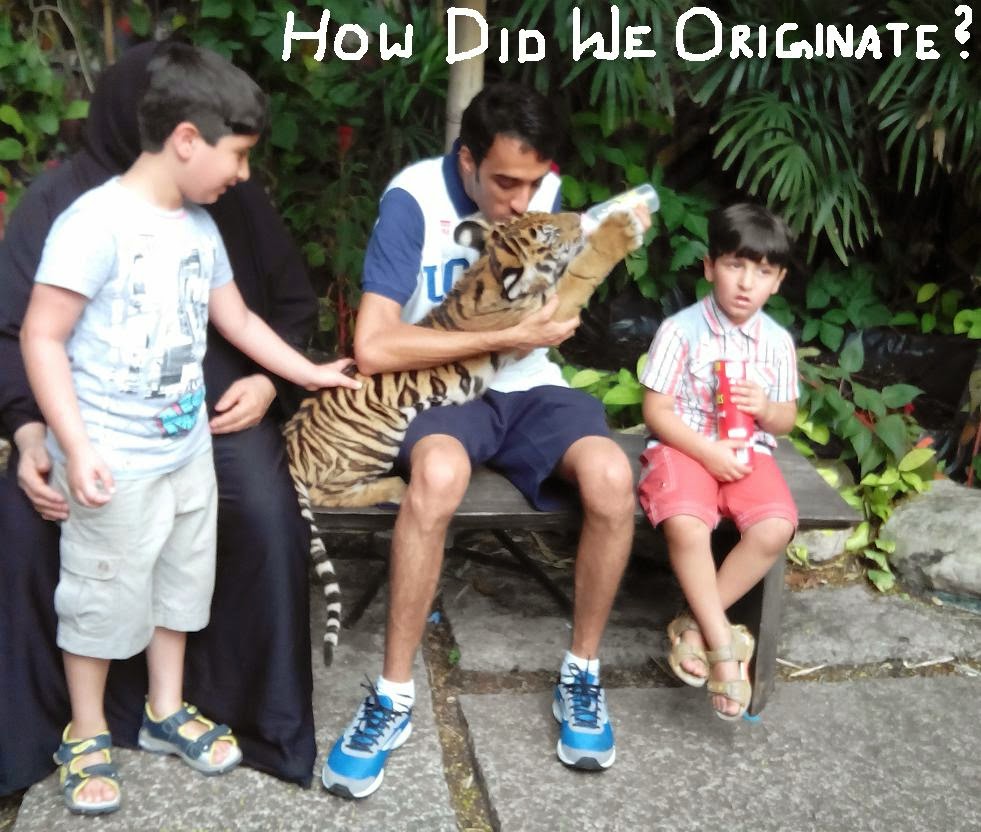 This curiosity is quite understandable. But when you check up with the answers they get, it often would be a great disappointment.

But let me tell you a secret. There is a super authentic information now available to us in the form of a huge english language book. A book of revelatory knowledge given to human kind from superior sources !

Let me first tell you in brief what this book reveals about the first human beings of earth. This is some thing like this :

The first human beings ever to be born on Earth were a pair of Twins, one a boy and the other a girl, born to a pre-human ape family. That means their parents were not humans, but a lemur type tree living animals, now extinct.

The twins were different from their parents, in the sense that there was a modification done in their genes while their embryos were developing. And this modification was carried out by an invisible but intelligent agency of God, the Prime Source of all Powers and Intelligences in the Universe, with due approvals from the latter.

This modification caused them to be different from their parents. The boy and the girl both possessed 'certain' superior biological qualities that enabled their brains to receive certain special inputs and mind capacities from the agencies of God. This brain capacity allowed them to receive certain invisible spirit powers to make contact with their minds, though feebly. Most importantly, they inherently got the capacity to feebly sense the invisible presence of God and a feeble compulsion to 'worship' their invisible Creator.

Though they never knew their names, they were registered in the records of the Universe Creators by some name which had some meaning.

It has been now revealed for the first time that we can refer their names as Andon and Fonta.

Andon and Fonta called each other in their own primitive language as 'Sonta-an' and 'Sonta-en' which for them meant ' One loved by mother' and 'One loved by father'.

This pair was the actual parents of all human beings.

They were indeed a remarkable and wonderful pair with many qualities that never existed in their parents nor in many of their desendants in the later years.

In fact, Andon and Fonta were eleven years of age, when they got the special gift from God, a power that was able to be induced in their brains, which made them human like. This power actually gave them the inherent capacity to judge right and wrong and a desire for perfection.

So this first pair of human beings got into existence on earth in B C 991474. A few thousand years less than a million years from now !

The first human race came into existence through biologic evolution, not automatic evolution, but controlled evolution. Control exercised by the agencies of God.

The first human couple were born in a place on the north western high lands of the Indian peninsula.

But soon they got the human qualities, they began to realize that they were different from others in their group. They had less hair on their bodies than the others and they walked upright on their hind legs unlike their parents who did like that only occassionally. They were about five feet tall and had bigger heads than others.

More importantly they had much superior and intelligent minds ! They possessed human certain human personality traits !

So one day this twins fled from their parents' group- this particular group of ancient tree dwelling Indian apes. When they separated from their group they were about fourteen years of age.

This happened after 21000 years after the dawn mammals appeared on earth created from other animal species by the process of 'controlled evolution'.

The twins moved northward and soon learned to make caves as their homes than tree tops.

Their intelligent and curious minds soon learnt to make fire from flint stones, though with a few months observation and consistent efforts. They also made use of the flint stones to make their crude weapons.

Two years after fleeing from their primate family, a child was born to the twins.

It was a boy. They called him 'Sontad'.

Sontad was the first human child ever born on earth to be to be covered with protective coverings at the time of birth. Fonta developed the instinct of caring for her helpless infant child till he is grown up.

Andon and Fonta had nineteen children in all.

Sontad took his younger sister as his mate. So also the others. In all the first human family grew in to a clan with fifty odd grandchildren and half a dozen great grandchildrenby the time Andon and Fonta became forty two years of age.

Andon and Fonta and a few of their family died when a rock fell on them during an earth quake.

Sontad, though injured, survived and took the leadership of this first human family.

Primitive man of earth grew and developed from them.

Since they originated from Andon, let us call this primitive men, Andonites.

Andonites had an swarthy complexion, more or less similar to the Eskimos. They had dark eyes. They had more hair on their bodies than modern human beings.

The early Andonites were a wonderful tribe. Their females affectionately protected their children. Their males valiantly protected others in their group from the attacks of wild animals.

They were flesh eaters. But occassionally ate fruits, nuts and tubers.

Until their twenty-seventh generation they had a common leadership.

Afterwards fights broke out in them for supremacy of leadership.

Soon the Adonites began to migrate to other areas on earth in groups. How the Andonites spread on earth in the next thousands of years is another story.

How they got other characteristics and biological features is yet another story.

[*Adapted from the Urantia Book ]

Some other related blogs connected with human evolution on earth:

1. THE EVOLUTIONARY TECHNIQUES OF LIFE !

2. Adam and Eve : Did God Create them for Making Us Sinners for Ever ?

3. Our Sovereign Lord: He has other 3.8 Million Worlds like Earth to look after !

[Those readers who are enthusiastic in science and interested in knowing the origin of life on earth and its evolution to the human race should consider reading Papers-58 to 63 of the Urantia Book. To know about the Urantia Book and to read these papers online click the Urantia India website link]
Posted by Er. Rajan C Mathew FIE