“Then he will say to those on his left, ‘Depart from me, you who are cursed, into the eternal fire prepared for the devil and his angels.  For I was hungry and you gave me nothing to eat, I was thirsty and you gave me nothing to drink,  I was a stranger and you did not invite me in, I needed clothes and you did not clothe me, I was sick and in prison and you did not look after me.’
“They also will answer, ‘Lord, when did we see you hungry or thirsty or a stranger or needing clothes or sick or in prison, and did not help you?’
“He will reply, ‘Truly I tell you, whatever you did not do for one of the least of these, you did not do for me.’
“Then they will go away to eternal punishment, but the righteous to eternal life.”

[Quote from the New Testament Bible: Matthew Chapter-25: 31-46: The Parable of the Sheep and the Goats] 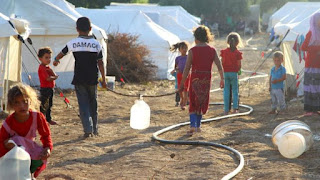 As a human being, my mind gets disturbed and I face mental distress when I hear and read about human agonies elsewhere. My eyes get moistened with joy when I read about other human beings come to the rescue of people who are in distress. When I read about immature, ignorant, cunning and egoistic humans who keep scheming about ways to put their fellow beings in to suffering in some manner or the other, my anger gets converted to a kind of sympathy arising out of shame and helplessness. I feel ashamed because such kinds also exist in the species to which I too belong!

I was ashamed of the German people of the World War-2 times because I had heard much about them and their leader Adolf Hitler who ordered millions of innocent Jews to be killed mercilessly and brutally. When I happen to read about such leaders and such peoples and such human individuals, I get a feeling of living in the barbaric times of human evolution of the pre-historic times! It becomes difficult to my mind to accept modern day maturity of humans as a reality!

But reading this BBC news today about the present day leadership of unified Germany caused my eyes to get wet. The German people and their leadership have migrated much towards real humanity now. As a collective they have come forward to help a wave of suffering fellow beings from Syria regardless of their ethnicity or religious non-compatibility! They are doing it when all the other well-to-do Europeans, Americans and the rich Arabs have ignored the cries of the suffering humanity from Syria and elsewhere!

It is about them Jesus Christ had told long back. How do they call themselves as followers of Jesus Christ?

Religions supposedly teach people the virtues of compassion, love and mercy. The religious texts may also have past histories of various groups of people who suffered a lot due to the errors committed by some among them or their leaders.

Christians believe that Jesus Christ is God incarnate in human form who kept on teaching about the virtues of love and compassion. People who call themselves as Christians filled the length and breadth of earth ever since. But their imperfections remained within them as usual.

They kept chanting 'Kyrie eleison' (Lord, have mercy!) and 'Kriste eleison' (Christ, have mercy!) repeatedly in their church worships, without knowing the ways in which they kept disobeying the divine commandments, day in and day out!

The followers of Christ successfully established powerful empires that culminated in to the western and the eastern forms of Christianity all of which disagreed with each other in one way or the other. Keeping the symbol of peace and love in front they kept fighting each other due to their mental imperfections! They kept doing mistakes that they called as sins and kept praying for mercy and redemption!

The two thousand years of their history was not anything of peace or love! To add to their woes, they were confronted by modified faith systems of the zealots who were willing to die and kill others in the name of the all merciful God!

The people of Syria  is facing the political turmoil linked to religious bigotry not for the first time now. They were in it for centuries ever since religious faith in a merciful God became corrupted by hopelessly immature humans.

My forefathers had to flee Syria long ago when religious bigotry of the middle east flared up due to the so called holy wars and the crusades! Historians say it happened a thousand odd years ago.

The Christian Syrians of those days became refugees and the lot among them who came to the Malabar coast of India, duly mixed with the locals and established the various Syrian Christian denominations of Kerala called the nasranis or the St.Thomas Christians .

As wars and battles had been a regular feature of these regions, fleeing is not any thing new for Syrians and their fellow beings in and around those regions.

But these things happened in the past when leaders of people were more of the beastly kind than those who were born in the modern times in the recent years.

Unfortunately that is what is happening. Who could have imagined that it could happen to the people of modern Syria under the president-ship of a highly educated post graduate eye specialist doctor educated in one of the best medical schools of modern United Kingdom?

When such things do happen, it goes beyond human logic and wisdom. That is when people talk about the invisible powers of the devil that keep influencing the gullible minds of imperfect humans.
Religious, political and economic speculations and theories keep getting invented.

But the pity is when those of the humans whose minds are not yet hardened or influenced by evil powers keep sitting indifferent or unconcerned.

And their silence is a greater error and a sin that elicit future ramification that has to be born by present and future generations of mankind.

'Depart from me, you who are cursed, into the eternal fire prepared for the devil and his angels'.

I do not know.

But one thing is sure. The Syrian refugee crisis now is a test case for evaluating human mental progress. I call it the Human Maturity Index or the human maturity status. Visit this page if you are interested in checking your maturity status.